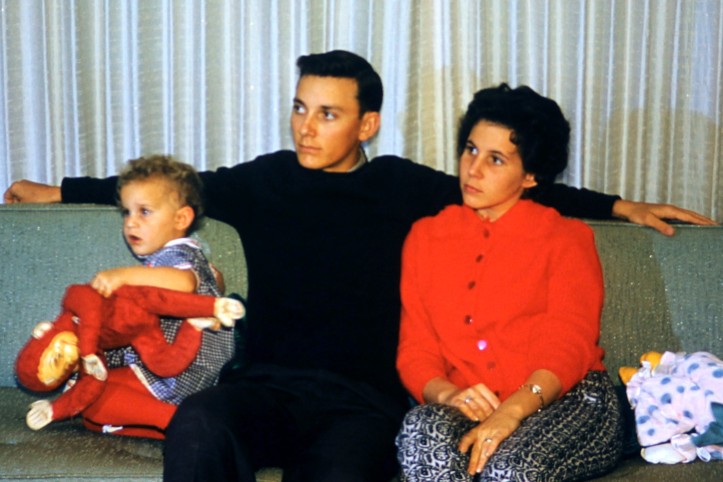 In the late 1950s, when my brother was a teenager, he got a bit rambunctious and fathered himself a daughter. I was eleven when my niece, Sheri Lynn, was born.

About ten years later, the good years began, the years when we were in, or merging into, our twenties, and regrouping a few times a year, as many of us as could gather for any given occasion. We were young and eager and always overjoyed to see one another. I remember the kitchen counters at night strewn with liquor bottles and cocktail glasses, bottle caps in sticky little pools of beer, ice cubes melting under discarded wedges of lemon and lime.

We cooked big breakfasts and suppers in those days, crowding into the kitchen with our ceaseless chatter and laughter, bumping Barbara as she lifted the lid on the stew pot to stir her simmering, melt-in-your-mouth beef stew, all of us leaning to the steam to inhale and groaning with impatience. We crowded around, getting in the way when Barb tried to open the oven door to check on her biscuits. She had to shoo and slap us out of the way. And when she brought the biscuits out, golden and tender and fragrant as flowers, we scooted up fast to the table, salivating like animals.

The kitchen was noisy in those days with ice trays slamming on the edge of the kitchen sink to loosen the ice cubes and the ice cubes dropping into glasses, with the slowing swirl of the hand blender, churning milk and butter into thick, whipped potatoes, with grease spitting from the iron skillet on the stove. Mother always fried chicken for us, standing at the stove with a tinkling glass of scotch and water in her hand and laughing delightedly at our craziness as she forked the tender, young chicken pieces over in hot Crisco.

In the sixties, fondue parties were all the rage and we had those, too. We’d push together the dining and a card table and line them with heavy cloth and newspaper and set out those tacky (we thought they were gorgeous) candle holders we’d made by gluing together empty mayo and peanut butter and little pimento cheese bottles and spray-painting them purple or yellow gold or icy blue. (The sixties were craft-crazy. Macramé plant holders handing everywhere.) During the course of these riotous fondue parties, the air turned heavy with clouds of burning oil and cigarette smoke and the table slowly filled with empty bottles. That we never set the place on fire with the oil spilling into the flames under the fondue pots and candles burning down to the bottom of their painted glasses must have been due to a kind and divine intervention.

We loved to talk. We talked and talked and talked about anything and everything. Berry and Barb and I were great readers, so we talked on many subjects. Berry always had jokes to tell, though I was always wary of them, and I think my discomfort was the source of his delight in telling them.

After our parties, we sprawled and slept, the last “goodnights” and giggles fading finally into deep night silence.

In the mornings, our gradual stirring about was like the awakening of birds. First one and then another would turn over, eyes squinting toward the clock on the nightstand, toward the light at the window. Then the first toilet flush, the first whispers in the hallway. Then Barbara moving about quietly in the kitchen, and a little later, the faint aroma of coffee drifting through the house. At the first “Mornin’,” spoken aloud, the rest of us would begin to get up, taking turns in the bathroom, shuffling into the kitchen in pajamas or bathrobes or tee shirts. And it would begin again, the yawns and sleepy laughter, the murmuring. Then the refrigerator door opening and closing, orange juice pouring into glasses, dishes clashing, and pots and pans picking up the tempo, the noise level rising.

And where was the youngest, where was the little girl, Sheri, in all this commotion? Forgotten, generally. I would see her sitting off to one side, in a corner of the room, watching, listening with glowing eyes.  As the years went by and she was 10 and 12 and 14, I would glance at her sitting in the shadow, on the fringes of our total absorption in one another, her eyes filled with us, a slight smile on her lips, and I began to feel sorry for her. We had ignored her; we had left her out. Her entire childhood seemed a blank. She had come into our lives too soon. We were just emerging from our own childhoods, too filled with the eagerness of our own rush into the mainstream of life to notice the shy little girl who sat on the floor against the wall, in the shadow of the bright, dancing lights of our personalities.

Decades later, I told Sheri that I felt guilty about the way we ignored her when she was a child. By then, she was in her forties. “I feel terrible about it,” I said.

“Are you kidding me? I loved it. I loved listening to all that grown-up talk.”

And I think she really did. She’s turned out better than all right. She’s strong, sensible, intelligent, and kind. She is gentle, patient, and fun-loving, with inner resources of courage that I have never had. She is good and generous of heart.

We didn’t make her all these things. One cannot mold the character of another. All we can do is nurture the soil in which that character unfolds, tendril by tendril and petal by petal, into the fullness of her own being.

Maybe our happy love for one another was all the sunlight her spirit needed to thrive, to become the strong source from which her grandchild is even now climbing into the light.