If, on a russet November day, I were stepping out of my house carrying a platter of clams to set on the table outside and I saw ninety Indians coming, their faces painted black, red, yellow, and white, their chests decorated with necklaces of white bones (whose?), I can tell you right now I’d sink to my knees, letting the clams slide off the platter, and then I’d start to hyperventilate and don’t kid yourself, you would, too.

But if I had done that on a particular November day in 1621 when ninety Indians walked into Plymouth settlement, their leader, Massasoit, would have looked down at me with some concern and asked, “Are you all right?  You sick?”  Then I would have said something like, “Great God in heaven, you scared the _____out of me,” and then we all would have laughed.

Fact is, the Wampanoag and the Plymouth Colony settlers were pretty good friends. When the Wampanoag walked in on the settlers’ harvest celebration (or were they invited?), they turned right around, went back into the forest and came out in no time with five deer—hostess gifts, you might say—because they had no intention of not staying for dinner.

They stayed for three days. New Englanders all, these native Americans and English immigrants fried cod fish and boiled lobsters, they slurped clams and mussels from pearled shells, and snacked between meals on popcorn, berries and roasted pumpkin seeds. They feasted on venison ribs accompanied with barley bread dipped into goose gravy; they gnawed joyously on turkey and swan legs, stripped roasted corn from the cob and picked the sticky corn from their teeth with fish bones. They played games, asked questions, explained themselves to one another as best they could, laughed, got sleepy, and napped, snoring probably. In the evenings, they warmed their hands around bowls of cooked peas and squash flavored with wild onion and told stories. They had a fine time, and then the Wampanoag waddled home, undoubtedly with digestive disorders, and the English battened down for the long, terrifying cold of winter.

The first Thanksgiving holiday was over.

The three-day pig-out described above, which Edward Winslow, one of the founders of the Plymouth colony, described in his journal, is generally considered by historians to be the origin of our American Thanksgiving Day holiday.

The place was in the area of modern-day Plymouth, Massachusetts, just across the bay from Cape Cod. The time, nearly four hundred years ago. But the people, whom we now see represented as cute little pilgrims and Indians in Thanksgiving holiday decorations—who were they, really? 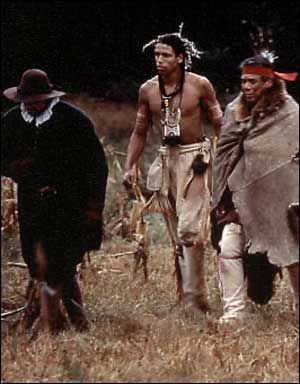 The Wampanoags were a nation of native Americans, about 12,000 in number, who lived in the areas known today as southeastern Massachusetts, Rhode Island, Martha’s Vineyard and Nantucket. They were described by Edward Winslow as tall and strong, even handsome. The English were members of a dissenting Protestant sect called Separatists who had emigrated first to Holland and then, in desperation, to the terrifying unknown of that continent way out there in the ocean somewhere known as North America. One of their leaders, William Bradford, described them as they sailed from Leiden, Holland, for America, referring to them for the first time in history as “pilgrims.”

So they lefte [that] goodly & pleasante citie, which had been ther resting place, nere 12 years; but they knew they were pilgrimes, & looked not much on these things; but lift up their eyes to ye heavens, their dearest cuntrie, and quieted their spirits.

Clearly these people were scared, but they turned their frightened faces to the sea and sailed west aboard a 180-ton cargo ship with three masts, square-rigged on the foremast and mainmast, lateen-rigged on the mizzenmast, 90–110 feet long and about 25 feet wide—a ship prettily named, “Mayflower.”

Sixty-six days later, the Mayflower dropped anchor off Cape Cod and the 100 surviving passengers (two had died of disease enroute) fell to their knees in a more deeply felt thanksgiving than they would ever feel again in their lives.

They had landed in the dead of winter. Three to four months later, fifty-three of them were dead of cold, disease and hunger.  In April, the survivors stood in frozen mud and watched as the Mayflower lifted anchor and came about, her sails filling with the wind. She was going home.

The Mayflower limped back to England where, two years later, she was dismantled for scrap timber, but the human cargo she had deposited on the very edge of a vast continent on the far side of the world survived. Alone and defenseless in an impenetrable wilderness, surrounded by stealthy predators such as they had never known existed, these English, born in English towns and on orderly English farms, felt that they were tasked with starting life over at the dawn of time.

They did the best they could.  They learned from the natives how to cultivate corn, how to fish, and hunt, trying all the while to keep to the religious and civil practices of the modern and “civilized” world they had left forever behind. They worked themselves into early graves and their survivors, hearts broken, rose from their knees and swung the axe to the tree, the hoe to the stone, the baby back to the hip and went on.

These English knew full well what they were doing. They had come to build a new England and they were stubbornly going to do it. They could not know, as they hacked away at the primeval forest that confronted them, that the sounds of their axes were pitifully lost down there in the trees on the edge of a continent that swept up and away from them in unimaginable reaches of forest and prairie, of jungle and swampland, of desert and canyon land, of mountains and great rivers. If they had known, their hearts might have failed them, but they did not know and so they kept on, and the trees came down.

Remember them on Thanksgiving Day.

Remember, too, the native Americans who let them live, who even gave them the tools of survival, the guys who were sitting around eating popcorn and watching kids play ball long before we even knew their world existed, or they ours.

And remember this, too; the world is getting better all the time.